Working off the Christmas turkey at the Gym. 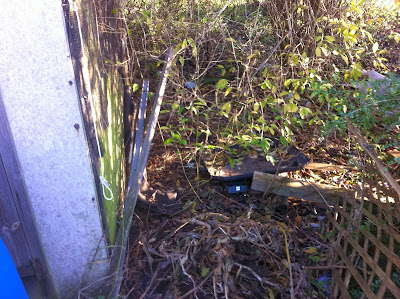 We're still in December, but I'm determined to be healthy and fit in 2014. The gym is only a short walk for me, so I'm starting my exercise the moment I leave the house. The facilities are basic, but are there if you need them. The changing room, loosely called. The toilet, rustic to say the least. The showers, very popular in April. I must say my back can really feel it after today's cardio workout. I am of course talking about my allotment plot. Me in a gym? Wash you mouth out, I say. 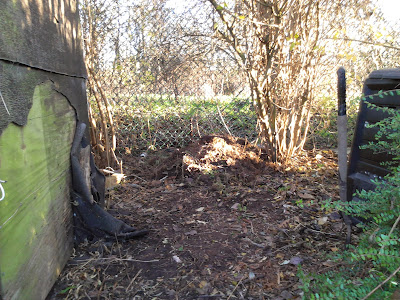 So where to begin. That was exactly my thought when I got to my plot. I still have the grass paths to dig up and I had heaps of grass clumps dotted around the plot which I really needed to move. While I was putting on my wellies, I could see that at the side of the shed I have a lot of space that I don't use. It's all covered by trees and bushes, so I thought it would be an ideal place to put the clumps of grass and while I was at it, I could put the compost bin there also. The first thing to do was to clear a way in. If you've read some of my older posts, you'll know I've been cutting the brambles back. Well I haven't got rid of the branches yet. Do I add to the pile or start burning them? I started to burn them, but it's still too damp, so, adding to the pile it is. It wasn't too bad actually, I didn't need to cut too much away. I also found out where the awful smell was coming from last year. I found what was left of a dead fox. Poor thing, the only thing to do was to bury the fox under the clumps of grass. I was surprised that it was only two wheelbarrows full. I did have a flat tyre on the wheelbarrow, but not to worry, it was only at the bottom of the wheel. As ever, the robins kept me company while I was working today. 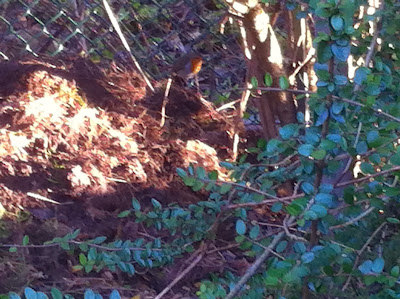 I did get rid of one section of the grass path and I'm so glad that I am because the dandelion roots were huge. I managed to fill a bag full. If only I could do something with them, I'd let them carry on growing. I did check on the onions but with no intention of mentioning them in this post, but when I saw one Red onion shoot coming up, I knew that I had to. And here it is. Happy New Year, till next time and thanks for reading. 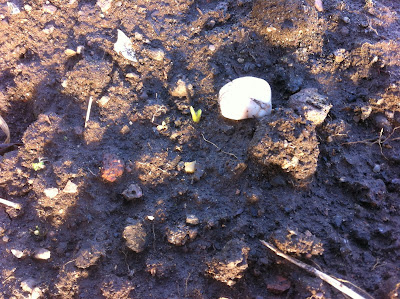 The Rent is paid for another year. 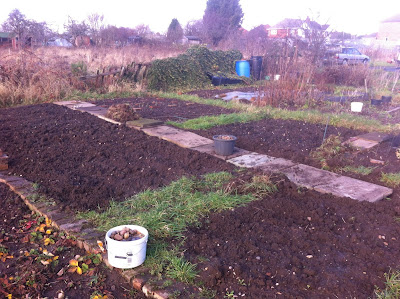 I've paid my rent for the year today, so, unfortunately you've got my blog to read for at least another year. There has been a bit of a price hike. Last year we paid £21, this it's gone up by a whopping 25p and that's for 300 square yards. Personally I think that's really good value. I don't think you can get gym membership for that money per month let alone the whole year. It's a council run site, and in my opinion, it's run quite well. I've have no real issues there and there is never a shortage of people giving you advice to help you out.


After having a mince pie and paying up, I made my way to my plot. With the little time I had, I dug  up the last of the parsnips, carried on digging out the old grass path and laid more of the slabs. It was a bit boggy today, but the grass and dandelion still came up very easy. I don't know how it is with other peoples plots either in the U.K. or anywhere else in the world, but I'm always digging up some weird and wonderful stuff. Glass, pottery and clay smoking pipes, all broken mind. I've even found a small toy car. Because I'm digging up the path that hasn't been disturbed for what must be decades, so I've come up with more than usual. I keep most of what I find. My neighbour joked I should try and put the pottery back together. Here are just some of what I've found along this stretch along with some of the other things I've collected. Merry Christmas, till next time and thanks for reading. 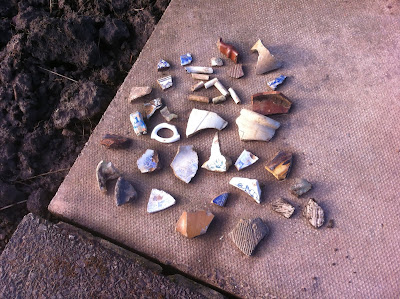 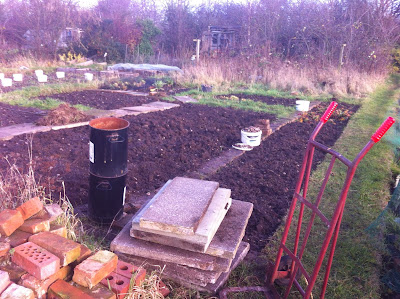 OK, so I didn't show my face at the allotment like I hoped I would according to my last post, and to top it off, I haven't made it for the last two weeks either. The small matter of Christmas coming ever so close has kept me away. I'm either out shopping for Christmas presents, or working extra hours to pay for it all. So something's gotta give. Unfortunately, it's the allotment.

Today I managed to make another double delivery to my plot. Why 2nd Class? It took so bloody long. Eight more slabs are at the allotment now. I did put one in place, but the rest will have to wait until I've dug some more or worked out where my paths across will go. Because I want to have six equal squares for crop rotation, I can't just put them where the old grass paths were, because they weren't quite equal and to give each year the same chance of growing the same amount, rather than having, for example, too many carrots one year then the next hardly any. And if you've read my carrot post from September, then you'll know I could never grow too many carrots. 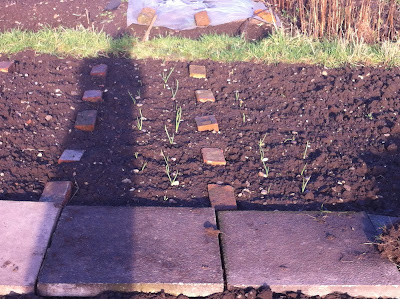 My Japanese White onions are still growing well. Don't want to count my chickens, but I'm hoping for a nice bumper come spring. While I was there, I did notice that I hadn't managed to get rid of all the couch grass as some blades of grass have started to rear their ugly heads. Luckily at this time of year they are on a grow slow, so they should be quite easy to dig up. If I managed to clear as much as I did a few months ago, then I'm not going to be too worried about a few blades of grass. Now at the risk of repeating the end of my last post, I am hoping to make it back to the allotment, at least before Christmas Day, as I've kept the last of my parsnips in the soil so I can dig them up for our Christmas dinner. Not only that, the rent is due for my plot. But just in case I don't manage another post before the big day, I'd like to wish you all a Merry Christmas, till next time and thanks for reading.
Posted by Lost The Plot at 20:27 No comments:

Delivery for Mr. the Plot. 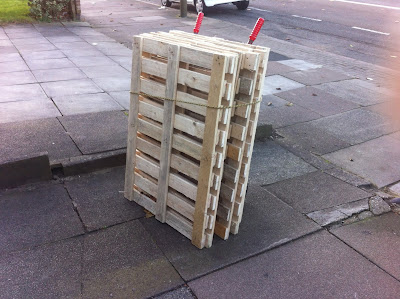 I finally made it to the allotment after nearly two weeks away from my plot. I really made up for my absence, I went twice. It would have been more but as I was wheeling round broken pallets and concrete slabs, my arms were aching, the fact I ran out of time didn't help either. Otherwise, I still had at least another three trips to make. A normal walk to the allotment only takes about ten minutes, but with all the weight and the gale force winds today it took another five minutes. With the slabs, as you may already know, I will be laying my paths in between my six squares. As for the broken pallets, they will be made into a fence at the end of my plot were the grapevine is. I will have to cut the grapevine back a bit as it's just growing wild at the moment. The fence will not go all the way across, I'm thinking of leaving a gap in the middle like I have now, although it was never by choice, you see all the wood is so rotten that this year a section of the fence just fell off. I like the idea of having an entrance in the middle as well as at the side, so that's what I'll do. Once the grapevine is under control and I can see where it actually starts and train it to go up. Luckily for me, the way the sun goes across from morning to night, it will not put any of my plot or anybody else's plot in the shade. It should look good. 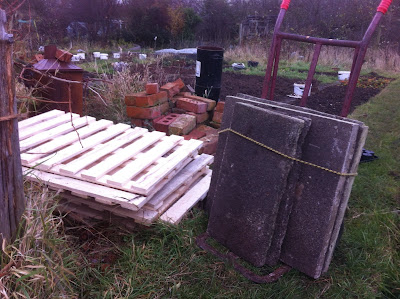 While I was there, I did look at what's happening. Still no sign of the Red onions. I did check to make sure that I planted them at the right time, but as they will be harvested in August, I'm hoping they will pick up in spring. 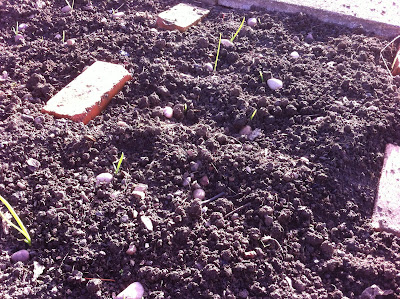 The Japanese Whites are doing well, some about three inches tall. I still have some parsnips left, but they can stay in for a bit longer and we can have them for Christmas dinner. And, believe it or not, I still have some strawberries trying ever so hard to ripen.


I'm hoping to show my face at the allotment again in the next few days while the weather holds out. I still have plenty to do and more deliveries to make. Till next time and thanks for reading.
Posted by Lost The Plot at 19:38 1 comment: 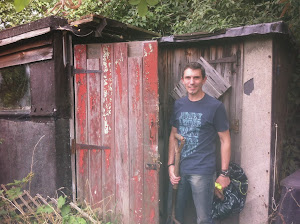 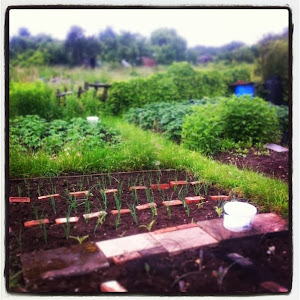